Toys in the Age of Wonder: Science Fiction, Society and the Symbolism of Play by Mark Rich (2020)

As it happened so often before, fiction by authors of early wonder and adventure tales, such as H. G. Wells, Jules Verne, Edgar Allan Poe, William Rice Burroughs, and others, provided man (and particularly children and youngsters) with hopes and fantasies about machines that featured technology not yet been invented to dream a while. 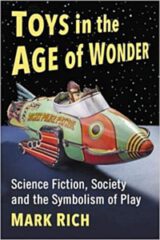 As the many toys that deal with any sort of mechanization, transport or aviation introduced here prove, the later generations actually developed machines that would fulfill many of those fantastic ideas. Needless to say that, owed to children’s curiosity, a strong interest in mechanics and invention was planted that way. “Children always have felt the spirit of the times in ways that no mere adults may understand. The fact that we are here today, to ponder past events, owes everything to the children who came before us, including those that we ourselves were, once upon a time.”

In the course of altogether seventeen chapters, the author presents toys that were popular – in the Western world – roughly between the 1850s to the 1950s. In those decades, demands and specifications of the consumers towards a toy industry changed. A brass mouse put in motion with a clockwork mechanism may have been impressive in 1880, but a child in 1930s America would be much happier when playing with a “Streamline Auto,” “Transcontinental Rocket Ship No. 1” or the “Mystery Plane.”

Instead of simply reproducing a mass of vintage toy ads and going into the companies’ respective catalogs, the different toys here basically illustrate a history of this or that attitude in (US) consumer history and popular tastes. In this case the book covers some of the technological advancements that affected life in general. Or rather, that would soon facilitate it, once that featured – and toy size – technology was introduced on a broad basis. Therefore, Toys in the Age of Wonder is more a cultural history of toys and its links to science and developing technology (Lewis Mumford is mentioned all over the text), than a toy collector’s handbook.
“I see toys as cultural objects having peculiar importance. They reflect and express social attitudes – often the same in this time period, being reflected in wonder tales.” It is with immense background and awareness of literary sources, state of the art inventions, and technology shows that with each new item, it seems, the future of many daily routines was introduced.

American author Mark Rich has already published a number of books on science fiction and toy history, so the toys and gadgets introduced here are naturally related to the time of their fabrication and consumption, and he offers several conclusions. In a minute analysis, he uncovers the respective fascination with past developments in science, literature, and even social behavior and communications.
As in many cases, apart from novels, fresh inventions and scientific discoveries promoted specific toys, games or displayed certain technological inventions – in micro scale – and the machinery involved.

Those were indeed “marvelous machines,” that the reader encounters on each page – and they all have a story to tell or a recent invention or groundbreaking discovery from the fields of optics, transportation, automation or engineering behind them.
Usually, Rich broods on the items (or artifacts) and the linked “new worlds idealism” that paved the way for their success in an entertaining way on 300+ pages, sometimes leaning strongly on philosophical interpretation. If there is a philosophy of toys and toy invention, it is at work here in the over-sized paperback with nearly 100 b/w pictures.

Mark Rich. Toys in the Age of Wonder: Science Fiction, Society and the Symbolism of Play. McFarland, 2020, 344 p.