Over the years, more than a handful of books on George Lucas’ Star Wars epic have been written that evaluated, criticized and interpreted the film franchise. When in 1977 Star Wars was first presented, several significant film critics identified a number of central aspects, roles, ideologies or an American perspective in it. 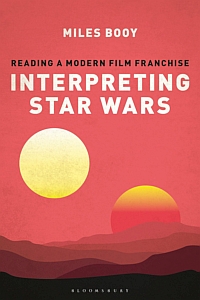 The main aspects of the title at hand are the reception and interpretation of the film over the years, with emphasis on the 1970s and 1980s. This includes a mass of articles, magazine pieces, interviews, comics, documentaries and novels.
For example, a chapter on the film’s reading during the Reagan administration follows a section on secularism vs. religion as main messages of the movie.
Author Miles Booy, an independent scholar, makes a strong point of the fact that when in 1981 the movie came back to the cinemas, it was suddenly tagged Star Wars Episode IV: A New Hope. The very idea of “hope” actually is central to the entire six chapters here.
As Star Wars was nothing like other popular science fiction films of the period, many of them with a dystopian outlook. Instead, in the movie an unbearable situation and political climate (for those who love freedom and democracy) are in the process of change, initiated by an idea and a handful of faithful protagonists who desperately want a revolution; and Luke Skywalker is their strongest hope to initiate that transition.

Nevertheless, “… the first interpretations of Star Wars were produced in the context of a Western society seemingly in decline, economically and – some thought- morally as well. At such a moment, hope might be something to be wished for. With the passage of time, new social contexts have generated different interpretations, while the addition of new films has taken the sage in new directions. Sequels and prequels provide new themes, but hoe – the concept which Lucas so visibly made central to the saga – has proven incredibly resilient and as a concept and flourished today, as central as it ever was, in our modern discourse where Star Wars is more celebrated than ever.”

Booy unfolds several time periods of state-of-the-art movie criticism, with the relevant information on economy, military involvements, political changes or consumer attitudes in the Western world at that time. In about a third of the book, he eloquently goes back to the plethora of interpretations the first movie generated and links those to their respective ideological origins and naturally the era that supplied them.
That way, he “deciphers” the many prior texts on the film. Which is quite a workload, as Lucas stirred the emotions and creative impulses of countless film experts, fans, psychologists, sociologists, and defenders of this or that ideological school for decades.

This is the main theme of the first two chapters, while chapter three, “The First Interpreters,” has the focus on texts from the late 1970s that were written by promoters who introduced the movie (and the comic before Star Wars even hit cinemas); this is one highlight of the book. The fourth chapter considers mythology and Lucas’ synthesis of ancient myths, western movie themes and religious/spiritual aspects that came to the attention of critics.
The last two chapters transport the survey of reviews and interpretations to the twenty-first century and usually very different readings of the films, while those later texts also benefited from impressions voiced 30 years earlier. “Star Wars, by this reading, exploded into contemporary pop culture in 1977, and it went through Hell, but it came out the other side, happier and shinier, liberal and diverse, ready to speak to us all (no translation droids needed). It will, no doubt, continue to do so in future years.”

Conservative fans of the franchise will be happy to find here more or less statements, reviews, musings on and reinterpretations of the original trilogy exclusively. The major later movies (anything after Return of the Jedi) receive comparatively little attention, just the last two parts deal with that stage of the epic, different approaches to the story and the new focus on Anakin Skywalker’s development.

Booy devotes his concluding section to the many biographies of franchise inventor George Lucas. With all the information from the previous chapters, Lucas’ life/biography equally was the subject of interpretation since 1983, when the first biography was published.
And, as could be expected, the spotlight on his life was equally subject to changing fashions and zeitgeist, so there his persona appears in rather different lights, depending on the biography’s publication date.
Interpreting Star Wars is smart text and a worthy addition to science fiction criticism and the evaluation (and altering interpretations) of the ‘expanded Star Wars universe’.