A 1980s blend of several earlier subcultures and youth movements such as punk, new wave, skinhead, rockabilly and even in part Goth, by the name of “psychobilly” is under the microscope here, mostly in an American context. 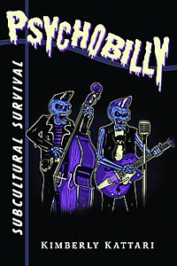 The most important modern subcultures originated in England, so did psychobilly, with all the lore, idols, hangouts such as the legendary London Klub Foot, and in this case heroes from a huge number of European bands. Those outfits of the first wave of psychobilly as the Meteors, Guana Batz, The Stingrays, The Coffin Nails, Demented Are Go, The Krewmen, King Kurt, Batmobile, and many others either were founded in England or neighboring countries, mostly in Belgium, France, Germany or The Netherlands.

As with all subcultures strongly connected to music, psychobilly would manifest itself in songs and also in a certain fashion or way of dressing; often worn by its devotees to shock and provoke a reaction of the mainstream, just like the song lyrics would. This subculture is still alive, and Kimberly Kattari, Assistant Professor of Ethnomusicology at Texas A&M University, here investigates its past and present.

The band’s lyrics and “… the songs reflect their subcultural interest in shocking society’s moral compass and resisting hegemonic culture by celebrating that which is normally considered profane, grotesque, repressed, disreputable, and nonconformist…”
Following or rather happening simultaneously with a mid-1980s rockabilly revival in Europe (called Neo-Rockabilly), psychobilly in a way borrowed a lot from that subculture’s men’s fashion, as the dark rolled up jeans (or of any color, as well as bleached fabrics), a variation of the rockabilly pompadour, namely the “flat top” or “wedge quiff,” a very high and often colored flat pompadour in unnatural length and carefully built with lots of hairspray, as well as Doc Martin boots, flannel shirts, or even Scottish kilts. There certainly is a huge amount of carnivalesque attitude involved, and by overdoing and shifting hair, piercing and tattoo fashion into grotesque dimensions, the movement parallels many of the lyrical renderings of their core bands.

Besides, there is unquestionably a dark attraction that is of interest to those individuals who maybe feel repelled or excluded from the mainstream, although they have no wish to be part of it. In many psychobilly lyrics, stories about graveyards, psychopaths, serial killers, zombies, vampires, monsters, skeletons, or any other setting good enough for a 1950s trash horror movie dominate.
And a lot of fun, allusion, parody and over exaggeration go with it. Often singers would shout such lyrics in fake agony, rolling eyes or any other sort of circus-like agitation to the pogo dancing crowd. “Band names such as Torment, Coffin Nails, Nekromantix, Skitzo, Coffin Draggers, Spellbound, Bloodsucking Zombies from Outer Space, Zombie Ghost Train, The Hellbillies, and the Mutilators reflect the genre’s fascination with dark topics.”

Kattari shares much information and insight concerning that particular subculture; as an observer who would usually – probably – be met with more open and sincere answers in her many interviews with participants, bands, festival organizers and psychobillies of various nationalities. For her research and field work was carried out for more than ten years, and she must have earned some credibility in the subculture for her stubbornness. She concludes that “… psychobilly demonstrates the continued longing of marginalized youth for a concrete and clear group identity manifested through a unified style and ideology that have changed little over thirty years.”

Her approach in the study is straightforward and fresh, but always related and based on theories of social interaction, ethnography, behaviorism and sociology, thereby using and relating to the writings of Hebdige, Hodkinson, Mair, Shildrick, Haenfler and others. Or rather, she tries to identify a formula that would sit somewhere between subcultural and post-subcultural approaches towards psychobilly, as the movement was/is a combination of other subcultures, as well as an original lifestyle, that probably was the last ‘real’ subculture before the Internet made such cultures obsolete.

“This study of psychobilly joins contemporary scholarship in demonstrating that ‘spectacular’ subcultures have in fact survived into the twenty-first century and that their participants still perform collective ideologies and practices hat distinguish them from what they consider dominant or mainstream culture, while recognizing that a relative degree of internal diversity and fluidity exists within such groups. … Subcultures are still incredibly important to how many people live their lives.”

Kattari locates the subculture on the margins of mainstream culture and music. The many individuals she interviewed (almost exclusively male) take great pride in being part of that subculture, and apart from being dissatisfied with contemporary fashion, music, or standard self-expression, they made their regional scenes and hangouts their second families and homes. She also gives a reliable chronological overview on how the (European and American) scenes changed, almost vanished, but were kept alive by a few die-hard psychobillies.
Furthermore, she breaks down the role and presence of female psychobillies, the motivation for sticking to the scene and devoting all personal aspects to that way of life. After all, psychobillies made their own world and just like any other subculture, they “construct and perform alternative ways of being that illustrate the possibilities for subverting hegemony and winning sovereignty over their own lives…”

A highly informative title that covers a nearly forgotten apolitical subculture that – even if rather short-lived in the first and second wave – was important as it transported the energy of punk and rockabilly into the next century, and in a way worked as some sort of memory bank or archive. And even though there is a very specific subculture presented here, many of her findings can be applied to other – but not to all – subcultures and youth cultures.
Besides, finding literature on psychobilly is difficult, as there are very few sources, not to mention the almost complete lack of academic texts. Until now, that is; so this title deserves attention for anybody with a shelf on youth culture, subcultures and the dynamics of musical styles for group building.

The story of The Who, a band that stared out as The Detours and the High Numbers, is probably the best example of a group that combined an innovative stage show that incorporated ideas borrowed from art theory with a strong dialogue directed at a style-minded fan base and consumer culture. “Across The Who’s first […]

With the advent of modernity, the choices of men and women to shape their own character freely, pick their styles and outfit and maybe even follow a new role model were multiplied. Thanks to travel, tourism, modern means of communication, news and image transfer, no longer only the local role models and heroes were attainable […]