Going back to the early days of medicine shows, vaudeville and traveling entertainment troupes, female performers there already had their regular part in the entertainment industry; and country music, or hillbilly music as it was first named, played a role in building up that reputation. 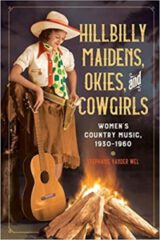 For example, what in the 1940s was transported as “parodic displays of southern culture and womanhood” by Patsy Montana or Kitty Wells, was already part of vaudeville and minstrel shows.

In Hillbilly Maidens, Okies, and Cowgirls: Women’s Country Music, Stephanie Vander Wel concentrates on the careers and (music and stage) personalities of Lulu Belle and Patsy Montana on Chicago’s WLS radio station and the National Barn Dance in the 1930s. Rose Maddox and Caroline Cotton and their impact on the L.A. country music scene in the 1940s and 1950s are further subjects, so are Jean Shepard’s, Kitty Wells’ and Goldie Hill’s careers in 1950s Nashville.

The chapters tell a chronological story of their tactics, difficulties, marketing tricks and explain the (sometimes only regional) success of the female country singers. As the center of the country music industry shifted over the years, parts one to three of the book deal with the respective cities the style and its artists were located at a certain period. First in Chicago in the thirties, then California was home predominantly to western swing (especially L.A.) a decade later, until finally the state of Tennessee in the 1950s would give the style a permanent home and a big stage at the Grand Ole Opry, making Nashville the center of a vast industry.

“This vibrant presence of women in country music can be found throughout its history as it was dispersed through radio, recordings, film, and later television well before Nashville had emerged as the center of country music production. … Focusing on the significant formats that helped catapult country music into the American consciousness in the 1930s, 1940s, and 1950s, it explores the musical and theatrical roles and reception of female performers in barn-dance radio, dace-hall culture, and honky-tonk music.”

The book not only discusses different styles of singing or performance, but considers the many changes from the 1930s to the late 1950s, that defined/altered the image of the female artists or womanhood and markers of femininity in general. In an American context, this meant the various images and stereotypes of working-class or middle-class feminine role models, differing imaginings of womanhood in the city and in the (Southern) countryside, as well as lyrics and personae associated with “rustic” and “unruly” women.

Female country artists naturally were familiar with those and other popular stereotypes or categories in use in their time, so employing a (fictional) role model for either a song, a string of songs or an entire stage persona was a common practice; simply because well-known role models would increase sales. Those stage personae could be strong, independent women, as well as any other models such as the naive country girl, the adventurous cowgirl who would rather explore the prairie all by herself than marry, the single woman frequenting bars in order to find a husband or the Southern farm girl who would (very carefully, though) undermine traditional rural role models with ironic and humorous lyrics.

While recognizing the success and achievements of the musical cowgirls and singing hillbilly women of the 1930s to the 1950s, for Vander Wel today, a contrasting image of women in society can be localized. “In our current postindustrial environment, the working class has become a social category far removed from its former masculinized identity, the virile proletariat, as once imagined by theorists. … With their musical depictions of redneck women and crazy ex-girlfriends, contemporary female country artists underscore the complex transformations of contemporary social relations, especially in respect to the feminization of the working class and the shrinking middle class, a category of identity whose members have worked hard to keep a safe distance from the sexualized bodies of the lower class.”

For the most parts, her study is convincing and very readable, except for some feminist approaches and theories that may cause raised eyebrows here and there; it is debatable whether some of the deceased great country music stars mentioned here would advocate many of those concepts. Her study has the emphasis on singing styles and cultural aspects of the performers; it is not a history of country music with respect to particularly gifted instrumentalists or groundbreaking new band arrangements. (With the possible exception of Rose Maddox, who in the late 1940s when teamed up with the excellent Maddox Brothers and Rose would perform wild up-tempo country numbers, very close to what only a few years later would be called rockabilly or rock’n’roll).

The author’s overall approach, to juxtapose “…women’s performances with commercial and societal expectations to focus on the way women artists wielded various performative devices to work within and against social norms” is presented with extremely many facts. She paints a good picture of female performers who “… not only voiced (culturally and acoustically) the vulnerabilities of working-class women but also critiqued the social restrictions and rigidity of gender conventions.” Other women country music artists of the 1970s and 1980s followed in those footsteps, being far more explicit in their lyrics. For instance, Loretta Lynn or Dolly Parton, this time standing their (basically) working-class ground and more drastically highlighted “the unjust double standards of male and female sexuality….”
For country music fans with an interest in female performers, this book clearly is a must.