In this short title, author George Beck takes a close look at some movies of the first half of the twentieth century that employed representations of American law enforcement, starting with silent era productions and chronologically end with films noir. 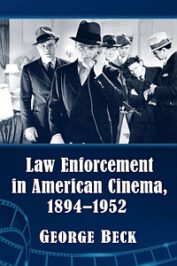 Five sections altogether and a final coda chapter on roughly 130 pages consider stereotypes, good cops, bad cops – who sometimes act like P.I.s- and P.I.s (who sometimes act like cops) and their image on the screen.
Roles that underwent quite a few changes, the more the media film developed, and the more production codes influenced their characterization.
This book aims to fill a mostly uncovered spot in studies, as the exclusive survey of movie police characters has been strongly neglected over the last few decades; mainly in favor of works on American criminals in films and their standing in popular culture. Naturally, the movies discussed here are no documentaries, but works of fiction. However, filmmakers too, throughout the decades, had their ideas about the police force and wanted to communicate a certain image of it.
With that idea in mind, Beck focuses “… on the ways filmmakers presented law enforcement’s changing roles in society, and especially the portrayals of whether police were considered to be either effective or ineffective.”

Generally in the silent era, the police more often than not was ridiculed and made fun of. Officers also were clearly identified as slow, brutal and violent agents of a careless government and an often unfair justice system that usually punished only the powerless and the poor. Furthermore, in early films of the century, the criminals generally received much more screen time for plot and close-ups than the lawmen and his doings of cracking the case. The criminal’s urge for upwards mobility, even at the cost of murder, seemingly was comprehensible to many. “This type of narrative also occurs because early filmmakers were aiming at their audiences, the urban poor, and thus plots of this sort were popular.”

With mob-themed films such as Little Caesar (1931), and audiences were being provided almost exclusively with the perspective of the criminal, the police became the antagonists or just another enemy gang, just as violent as the mobsters. Those depictions of the police (and the gangsters) only changed after the enforcement of the Hays Code, by the Production Code Administration in 1934, that prohibited negative representations of cops, judges and the like; furthermore, now the bad guys on screen finally had to be brought to judgment, no matter what.
The majority of the later movies that featured the police force, together with a number of productions that were explicitly supported by police officials and the FBI, were conceived with a certain educational intention, showing detailed police procedure, exclusively effective officers, teamwork and identifying the good guys was made easy for the audiences.

Beck’s first three chapters are outstanding, as they very concisely identify how and why the role of the police force was seen critical and how law enforcement was often perceived as ineffective and basically a hangout for violent bullies. His two main examples of the silent-era feature film are the two classics Easy Street (1913) and Cops (1922).

The brief last chapter examines explicitly how the police force is depicted in film noir and in detail deals with The Big Sleep (1946), Where the Sidewalks End (1950), and The Maltese Falcon (1941). The genre often provided a setting where no exact boundaries could tell an efficient cop from an efficient P.I., as all parties were uncertain of whether the other one could be trusted at all. Additionally, the section “analyzes the ambiguous character of the private investigator in film noir as he works both with and against the police force.”

The coda section discusses the western classic High Noon (1952) with respect to a new  and optimistic representation of the police force in the 1950s, when the American economy prospered and simultaneous the tough, at times brutal 1940s type cops made way for the honest, paternal police officer who went strictly by the book.

George Beck, a police sergeant, journalist and adjunct professor at Fairleigh Dickinson University, with Law Enforcement in American Cinema delivers a short but very rewarding title that supplies a lot of context about historical police work, various waves of censorship for presenting it in theaters, the history of law enforcement as related to training, police unions and standardized national procedure as topics for feature films. And naturally he illustrates the shifting (public and popcultural) image of those officers and crime fighters in the early days of American film history from an insider’s point of view.