The story of The Who, a band that stared out as The Detours and the High Numbers, is probably the best example of a group that combined an innovative stage show that incorporated ideas borrowed from art theory with a strong dialogue directed at a style-minded fan base and consumer culture. 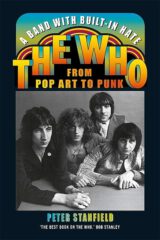 “Across The Who’s first ten years of creative activity, the band repeatedly refused the limits imposed on post-war youth and on their chosen art form pop music. In their mutinous stance The Who traipsed over the conventions of civility and restraint.”

The Who were unusual in their obsession with style and musical innovation, after all, they were adopted by the Mod crowd as one of their ‘pet bands,’ and their shows received a lot of attention. Commercially, the band was much more successful than other groups with the same following, like The Small Faces or The Creation.

The ‘built-in hatred’ is a quotation, describing Pete Townshend’s multiple remarks on contemporary (1960s) popular music, namely the entire band’s disgust for it, and that they were out to destroy the very idea of pop music as it existed so far. Including the many hits they delivered themselves. Which sounded a bit strange already in 1965 when he first mentioned it, as the band, together with a number of competitors such as The Rolling Stones, The Beatles, The Kinks and various other British pop greats were out to achieve just that: a top rating in the charts. If Townshend’s aim was ever meant to be taken seriously, or if it served – like a lot of other claims and premises provided by pop musicians who received heavy overage in contemporary media – as a marketing idea is one of the subjects of Peter Stanfield’s title.
The band’s raw energy, the exploitation of the hatred quickly was associated with the band’s live performances. When a tornado like Keith Moon and a guitar-smashing Townshend were proof to that energy that was more than just a stage show. For him, music, the arts and the new pop sound of the mid-sixties served as unique playground that had the potential to change the ideas of art and the ways people experienced it.

While the author supplies an excellent overview on prominent contemporary avant-garde art developments of 1950s and 1960s England (and the people and schools behind it), he also draws attention to some oversimplifications and misinterpretations provided by the likes of (otherwise brilliant) Hoggart and similar protectors of a ‘superficial’ British culture.
As the feared ‘Americanisation’ of British culture was by no means a mostly negative thing, since many bands carried musical ideas of black American artists, blues and soul musicians, one step further or rendered it their way. There would be no 45s by the Rolling Stones, Animals or Yardbirds without that influence.
The Who, however, quickly skipped the blues phase and started with (maximum) R’n’B, in their urban, much more electric and European version of it. In Stanfield’s view, Hoggart – although delivering a fantastic title on the domestic working-class and their adolescence in post-war Britain – and others felt the unnecessary urge to protect Britain’s culture from all alien influences. Obviously, he was totally underestimated the power and influence of Pop art, that also stood for simplification, a combination of high and low arts, of the magnified and the simple.
One of those blends was British Beat music developing back then on countless Soho stages, as Stanfield’s very vivid excursions in the first chapters tell. In those chapters, the powerful influence of youth cultures or rather, their exploitation in the media are put into the focus, usually not a prominent topic in books about bands from the sixties. In this case, however, many newspaper headlines, “riot” reports, domestic documentaries featuring Mods, urban nightlife, Soho and youth culture, as well a whole string of British social realist movies are mentioned in detail. They, too, have a part in the development of the London music scene.
Many quotes, interviews and opinions by pop critics and music buffs (among them Lawrence Alloway, Nik Cohn, and George Melly) are blended in perfectly into the seven chapters. (The Who’s first manager Kit Lambert dreamed of a career as movie director, and originally had the idea to feature them in a youth culture documentary, long before even considering a career in music business.)

They mechanisms at work within Mod culture had bands such as The Who or the Small Faces ‘receive permission’ to perform in the Mod-dominated venues of Soho, like the Marquee. Townshend was one of the most attentive performers to realize that. While other contemporary groups had no doubt that they were the most important people around, with a Mod audience, he recalls, it was ” … the other way round. We’re the stars, and you can entertain us for a while, if you behave yourself. That was the tone of it.”
As it turned out, The Who could “read” not just the Mods and their expectations, but the band became experienced in detecting and conducting dialogue with audiences either from the stage or the studio. For a while, maybe until the mid-70s, they were one step ahead of public discourse and art criticism, with a strategy that presented new musical ideas before the press put them into words and create trends.

With many examples, Stanfield shines some light on the many connections, interactions and results of a long dialogue between Pop art, commercial exploitation and art theories that would promote creative output usually reserved for connoisseurs and artists of ‘the elite,’ only this time to be readily available for everybody. Several other important bands were in part influenced by The Who, such as The Move, John’s Children, The Creation, The Action, and The Eyes, who also get their share of attention here. The Who, nevertheless, were avant-garde, and they operated at the intersection of fine and popular arts, impossible only a decade earlier. Besides, the destruction of instruments and gear in The Who’s context also was a creative, if the destructive process, in order to create sound. “The Who made the simple things complicated and the complicated simple; they put pop and art together in a set of couplings which rode the lines between authenticity and artifice, self-determination and co-option, the intolerant and the permissive.”

Then, things changed, and another style presented itself on Soho’s stages. The advent of punk in the 70s had a crucial effect on the band. Now, the bad and loud guys who showed no respect for anything or anybody, were no longer synonymous with The Who. Other bands such as the Sex Pistols, in a way kept that spirit alive, at least in part, as they lacked most of The Who’s early creative energy.
At that time, Townshend and his band mates, so it seemed to most fans and music critics, had become more or less ‘civilized,’ and The Who had changed from a Pop art band into a rock outfit, best known for deafening football stadium concerts. Even if that period saw the release of Quadrophenia, both the album and the movie.

“Like any commercial product, obsolescence had been built into their concept of self. Renewing the contract between them and their audience was dependent upon movement, shucking off the past as dead weight, refusing the pull of tradition. …. In pop, age matters. After punk, The Who were the establishment, an institution. Rock was now a profession.”

This definitely is not the kind of book on The Who you expected. A Band with Built-In Hate is an unusual title, very well done and enlightening, if you appreciate the important issue of style and its relation to (pop) theories and the larger significance behind creative production that will not discriminate between high and popular art.

All or Nothing: The Authorised Story of Steve Marriott: by Simon Spence (2021)

The careers of many heroes of the British Invasion and musicians of the 1960s have been adequately documented in books, films and memoirs. Some performers, nevertheless, have still not yet received the attention and the praise they deserve. If there was a reliable ranking of the best British soul/blues singers of all times, it could […]

The Kinks: Songs of the Semi-Detached by Mark Doyle (2020)

For all of those Kinks fans interested in a biography or personal history of the Davies brothers: this book will not satisfy you. However, as there is no lack of either Ray Davies or Kinks biographies, this title has something else, something better to offer. Centered around the idea of conceptual pairs that differ tremendously […]

The era from the early 1950s to the mid-1960s probably was the busiest period of the British film industry. Many thrillers were shot in those years, including a great number of movies (and B movies) that often featured American actors; this arrangement would draw audiences to cinemas in England and simultaneously ensure interest for moviegoers […]