The era from the early 1950s to the mid-1960s probably was the busiest period of the British film industry. Many thrillers were shot in those years, including a great number of movies (and B movies) that often featured American actors; this arrangement would draw audiences to cinemas in England and simultaneously ensure interest for moviegoers in the US. The British industry kept pumping out thrillers until the late 1970s, when the reference book at hand ends. 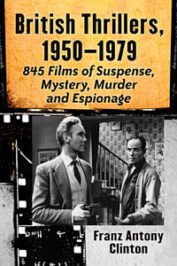 “This book is indented to be a thorough compendium of British thriller films – specifically main features and B movies – from 1950 to 1979, a fascinating period that I consider a golden age of the genre due to the sheer volume and variety of productions therein.”

Apart from lots of information on specific actors, screenwriters, locations and directors, the eight chapters of British Thrillers provide 845 movies heavily loaded with murder, espionage, suspense and crime of all sorts (actually, many more are mentioned as the chapters unfold).
Readers will find numerous seemingly lost treasures here; each picture is specified in a review (sometimes also contemporary coverage), synopsis, adaptation source, and respective production company.
The book is accompanied by almost 140 black-and-white photographs, film stills, promotional shots and movie posters. Furthermore, two indexes (one for names and one for movies) and a 50 page filmography listing just the main actors, film director, running time, GB release year and directors of photography and music are enclosed. An extra appendix lists the US stars in British movies.

Even though most movies are a combination of various genres, author Franz Antony Clinton, a London-based Anglo-Spanish film buff (and also a professional flamenco guitarist), roughly divided the mass of films into eight subcategories and chapters. They feature espionage, mystery and murder, the psychological and the psychopathic, crime solvers, the business of crime, suspense, Merton Park’s Edgar Wallace B-Movie Series, and action/adventure as their main subjects.
While all parts are conclusive, the section on crime solvers – anybody either official, private, insurance agent, amateur, reporter and “outlandish” – stands out; little wonder, as England’s popular culture has a long history of prominent fictional detectives such as Holmes, Poirot, and Marple.
The shorter chapter seven on the altogether 47 Edgar Wallace movies “… all low in budget but high in quality …”  and made in London’s Merton Park studios is unusual, as no other sequel movie or TV show gets as much attention here. But then, it was the one feature where countless English actors showed their skills, and sometimes future stars had their earliest screen appearance there. The section helps understanding the British movie market and audience preferences of that time.

A sound title that not only works as an eye-opener – considering how many B movies and detective films were produced in England then – but also demonstrates that the film noir genre was not exclusively American (even though it was born there). And it proves on nearly 450 pages that there was a very distinctive British way to make thrillers in any sort of environment with a setting that would present murder and crime everywhere, ignoring class distinctions.

There is hardly another active English musician who can look back on a catalog of great music and social comment like Paul Weller, former front man of significant bands of the 1970s, 1980s and well-known solo artist of the 2000s, and also as a political voice addressing important issues. On roughly 160 pages author Andrew […]