For those interested not only in the finished product “motion picture,” but to the students  and fans who consider movie audio and its use an art form, the name Michel Chion will definitively sound familiar. 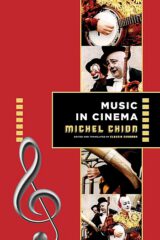 The French scholar, filmmaker, and composer who has written more than thirty titles on the topics sound, film and music (and their interdependency) originally published his La Musique au Cinema in 1995.
A very successful volume that saw several editions, and in 2019 was updated again. The book at hand, Music in Cinema, is the latest version of that work in English, expertly edited and translated by Claudia Gorbman, American professor emerita of film studies.

Chion’s texts usually impress with their clear language, and a  focus on the experience and illustration of terms and phenomena, rather than on heavy and complicated theory. This book is no exception, and as the he muses on the endless string of combinations of films and musics, he thoroughly tells the history of the cinema and its changing relations to musics, sound and audio as a significant extra character who has done his bit of traveling before he met the celluloid.

By referring to many examples from widely circulated and famous movies, such as The Third Man, Felicité, Close Encounters of the Third Kind, Thelma and Louise, La Dolce Vita, Singin’ in the Rain, Alien and others he demonstrates the impact sound had on those productions.
Thereby always turning to the teamwork of the duet: in movies both art forms, moving pictures and sound/music, meet, cooperate and only in combination establish the cinematic experience, that includes musique concrète, diegetic and nondiegetic audio.

“There is actually neither equality nor complementary between music and cinema … That is why the title of my book is ‘music in cinema,’ that ‘in’ by no means signifying ‘and.’ My title says that a film is a frame that everything can enter – theater, poetry, painting – but it’s a frame that appropriates all that it incorporates, whether it be passages of a Beethoven string quartet, or a pop song, or Berber music from the Sahara, or an ‘original’ instrumental score.”

Eventually, film frames and audio support and influence each other, no matter how sound or music – Chion identifies at least four shapes – is sensed (and not always actuality heard) while attending a movie theater. For him, that goes for the silent movie that subsequently was fitted with a tailor-made soundtrack and the modern movie that uses music, sounds, and atonal scores.

By telling a short history of the long tradition of that cooperation with significant changes and their respective technical and aesthetic origins, Chion here creates a fascinating philosophical journey. A highly recommend title and a celebration of the two art forms: film music/film audio and the art of shooting pictures.

Italian Giallo in Film and Television: A Critical History by Roberto Curti (2022)

If there is one particular modern genre that is strongly connected with the history of Italian filmmaking, it obviously is the genre of “the yellow ones,” in Italian: “gialli”. The countless movies, dime novels, detective stories and murder mysteries in Italy are subsumed under that titles, similar to “pulp” novels, and crime fiction that got […]

When in 1968 Japanese low-budget director Seijun Suzuki was fired by the Nikkatsu production company, it seemed to be the end of a so far fantastic career in the movies. Between 1956 and 1967 Suzuki made forty films there; some of these were quite successful. While for Nikkatsu Studios, it obviously was just another personnel […]