The Return of Twin Peaks: Squaring the Circle by Franck Boulègue (2021)

There is little doubt that the TV show Twin Peaks, the brainchild of David Lynch and Mark Frost, was a very special project. This was true for the original series (1990 – 1991) that consisted of two seasons and left millions of enthusiasts hunger for conclusions, as many open threads remained and in the show itself, a strong hint for future development was voiced. 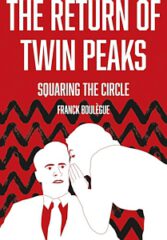 This reputation is even more obvious for the third season, that in 2017 was presented to fans who still adored the show 25 years later. This time, in Twin Peaks: The Return, Lynch and Frost went several steps further and took the already complex set of a small-town mystery to extraordinary levels, both with respect to plot, new settings (all over the US and to other dimensions) and stunning revelations. Now shifting between flashbacks, multiverses, different temporal spheres and links to obscure and not too friendly higher beings; and still had the story connected to Agent Cooper and Laura Palmer. The fans, being used to weird, inexplicable, mysterious and occult features of the original series, were not disappointed with the 2017 production. The new show easily set new standards and with a single blow effortlessly rendered all other TV shows obsolete, outdated and boring, some would say.

Author Franck Boulègue’s strategy while musing on season three, however, is not exactly focused on explaining and lecturing, even though the eighteen episodes, as usual, reveal more mysteries and riddles than answers and explanations. Rather, Squaring the Circle makes use of connections and lots of background, as he suggests parallels, metaphors and possible ways of seeing/reading the countless allusions to spirituality, science, metaphysics and openness of comprehending reality in the show. And as currently there are not too many books around concerned with season three exclusively (although that will change), the ‘research area’ still is comparatively fresh and unaffected.

The powerful visual style Lynch/Frost employ, together with complicated and twisted plots to Boulègue may look like a treasure trove, loaded with enigmata, allusions and hidden links. “The universe of the series is similar to a vast encrypted book that awaits decoding: ‘break the code, sole crime’, to echo Agent Cooper in season 1, episode 4. … The audience is led to complete the story by guessing how the pieces fit together, taking leverage from the elements and hints left by Lynch and Frost.”

The almost 90 pictures that accompany the title (75 in color), illustrate a few of the various visual echoes, allusions and quotes Lynch/Frost referr to, to have the third season tied to the history of not just Western popular culture, but to mythology, religion, conspiracy theories, epic tales such as the Odyssey, the occult, and several systems of spirituality. All of which (may) prove time and again that man (or Agent Cooper, his doppelgangers or incarnations) is never actually in control of anything.

Naturally, considering the many “twins” that appear in the season, Lynch/Frost created a multitude of occasions to exhibit varieties all concerned with transformations, reincarnations, transitions, repetitions, memories and reflections. After all, it is a unique show and to dive into the many plots and incidents will make an unprepared observer – not familiar with the nature of the location, spiritual energy and characters of Twin Peaks the show – dizzy. “The clear-cut separation of fiction from reality usually expected from a traditional television series does not exist in The Return, where both are intertwined, to the extent that it becomes difficult to know where one ends and the other begins.”

In three chapters Boulègue targets his perception of The Return and tries to find leverage to unveil Lynch’s ideas and how he may have build his own text. Chapter one step by step goes into the concepts of season three, thereby trying to locate it in the canon of American TV shows, modes of storytelling, ancient epic quests, adventure books and classic American films that may have influenced Lynch, as well as the important theatrical role of audio for the show.

The next chapter is concerned with the mass of messages from different episodes of the season, including the function of technology, science and electricity in coming to terms with the many puzzles and loose ends.

Chapter three is probably the most interesting part, the focus here is on religious/spiritual aspects of the show, topics that informed more or less every single episode of Twin Peaks from the start. And naturally, neither approach – the focus on science and technology or on spirituality – will satisfy the critic, nor did it satisfy the sober and fact-based approach of the FBI agents in the show. This is another aspect of the production that makes it very realistic, as this uncertainty and ambivalence when explanations are hard to come by equally inform our reality.

In The Return of Twin Peaks: Squaring the Circle we find a fascinating and comprehensive (possible) approach to read season three, as experienced by Franck Boulègue. Fans will appreciate it, as he ties up some ends, if they stick to his carefully established road map, that is fueled by a huge pool of experience from film studies, visual arts and popular culture. Naturally, readers should approach the title it with an open mind, as the author includes various sources and voices that may seem out of place; but then, this happens in Twin Peaks all the time.

In 1999, Star Trek: Voyager (STV) for a while would be the sole Gene Roddenberry series to come up with fresh episodes on the relatively new UPN network. That same year Star Trek: Deep Space Nine had its last episode, as had Star Trek: The Next Generation in 1994. Accordingly in 1999, the future of […]