Part of the unique intensity of noir and neo-noir movies is rooted in the combination of masterful scripts, extraordinary directors and the skillful highlighting of the psychological aspects wherever a protagonist needs to take action. But often is sabotaged while trying, to simplify one of many film noir plots. 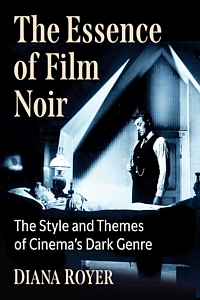 By carefully investigating the genre, several persistent themes, storylines and situations can be identified, even those resurfacing in neo-noirs. To shed light on some of those, author Diana Royer, a professor of English at Miami University in Ohio, introduces each of the six sections of the title with an excursion into the cultural and literary heritage of her respective subjects. Her present title “… contributes to the scholarship on film noir by discussing the genre’s thematic aspects, cultural contexts, and stylistic qualities.”

Readers benefit from the deep analysis of films noir that are based on a literary origin; those titles are referred to in great detail, with special attention to the altered outcome and message in the finished movie. As novels often had very different endings and also were much more violent, but production codes would not allow such action on the screen. Her overall approach to the genre is not limited to the golden era of film noir, but from the start she also turns to neo-noir, and how it extended aspects of style and photography, but simultaneously added some new features.

Chapters two and three, with deeper analysis of Nicholas Ray’s They Live by Night (1948), Orson Welles’ Touch of Evil (1958), and the films Ministry of Fear (1944), Strange Holiday (1945), and I Was a Communist for the F.B.I. (1951), among others, lean on the characterization of Nazis, Communists, and exaggerated paranoia or right-wing political aspects of several titles.
Con artists and large-scale scams are the topic of the following longer chapter, while the fifth section centers on “Religious Delusions in Film Noir,” a topic rarely investigated.
In close readings of The Night of the Hunter (1955), Se7en (1995) and Mean Streets (1973) “messianic figures with pathological tendencies” are in the foreground. This is maybe the most persuasive text here, as the very nature of film noir and its protagonists is strongly connected to an overall wish for control that is met by an air of powerlessness. A strong sense of forces unknown that seemingly put the main characters into terrible situations, with hardly any satisfactory way out while lacking friends, allies or trustworthy representatives of the law or the church is a common feature. Which is also the case if the protagonists experience their lives as such, due to mental problems. Those maniacal individuals, Royer calls them “religious figures-gone-bad,” are found often in noirs, and they are even more easily corruptible, violent or deceptive as they experience themselves as chosen messengers.
It is appealing how many themes she identified in her last chapter, “Highways, By-ways and Dislocations: The Self in Neo-Noir,” while the questions of continuity of the self or reliability of experience and vision already informed the style in the 1940s. However, the neo-noirs added massively to those threads as films such as A History of Violence (2005), Memento (2000), and Identity (2003) would prove.

Even though there are several books on the genre that attempt to dissect film noir, The Essence of Film Noir is one of the rather theoretical ones with strong ties to hard-boiled detective fiction. Meaning, for example, that Royer picks up a subject and refers to it in the respective movies of the 1940s and 1980s and how the matter was approached, depending on the director’s style. Instead of simply listing several noirs with similar plots and themes.
A stimulating read, particularly for audiences interested in neo-noirs.

Italian Giallo in Film and Television: A Critical History by Roberto Curti (2022)

If there is one particular modern genre that is strongly connected with the history of Italian filmmaking, it obviously is the genre of “the yellow ones,” in Italian: “gialli”. The countless movies, dime novels, detective stories and murder mysteries in Italy are subsumed under that titles, similar to “pulp” novels, and crime fiction that got […]