When in movies a crime is committed against a citizen and neither the police force nor judges seem able or willing to catch and punish the assailant, mostly two options are presented to the victim/protagonist: to accept that the law and its divisions can fail sometimes, or to start a crusade against the aggressor all by himself. 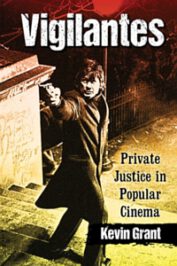 This behavior would be called “vigilante justice,” an equally illegal practice, which sometimes in films about such individuals is punished by the same legal system that shortly before malfunctioned entirely.

In Vigilantes, seven illustrated chapters shed some light on the different types of vigilante justice. Carried out – rightfully or not, depending on the point of view and usually as the final way to find justice, or another way of retribution – by either lawmen, gunmen, (formerly) normal and law-abiding citizens, cops out of line, decorated military veterans, exterminators or female equalizers (who usually take revenge for a rape).
Vigilante action as specified here, can take various forms, and in the movies both individuals, groups or even organizations (as the Ku Klux Klan in a few productions from the 1920s and 1930s) are involved, working on all levels from untrained to professional.

With respect to the theater audiences that voiced loud approval while the aggressors are severely punished or killed on the screen by the vigilante, there seemingly is a huge support for illegal action of that kind. And many revenge movies were greeted with such excitement in the cinemas.

While numerous film critics, sociologists and police commands disapproved of such movies because of their demonstration of self-administered justice, their success, particularly that of films with several sequels such as Death Wish (1974), proved strong interest and sympathy for the vigilante in the general (American) public.

Such sentiment may go back to frontier behavior, or rather was portrayed many times in western movies, where the law was either too far away, corrupt or indifferent. A man (and sometimes a woman) holding a gun was the way to restore order and punish hose responsible. Even though there is not exactly a tradition of American frontier vigilantism, as originally “vigilante” describes citizen’s opposition to laws or regulations where these had no place or basis, and thus were refused.
Vigilantes were described as rather watchful, attentive and critical citizens who would have an eye on the local administration and jurisdiction. However, it is well possible, that in the early 18th century the origins of the general mistrust in civil and political authorities – still widespread today – emerged.

Grant keeps coming back to diverse committee establishments that already existed in colonial times, illegitimate actions of vigilantes, or groups of civilians in large cities that mobilized whenever he goes into details of various movies here. Such reference to historical events makes the figure of the vigilante more accessible and is quite helpful in observing his violent punishments. Nevertheless, the vigilante movie genre typically shows how criminal law failed first, as the victim’s retaliation usually starts after courts or judges failed to penalize the assailants.

Revenge movies have various settings, and the vigilantes they feature would see the need for action almost anywhere: small towns, rural areas, big cities, or the workplace.
The directors of such productions usually distanced themselves from the violence and illegal action of their protagonists, describing their films as purely fictional or severe warnings; however, they hit a nerve, as the genre became a box-office hit for years.

Death Wish, and other movies of its kind kept returning in roughly the three decade to come, also could be taken as violent pleas to the authorities in any (American) city. The police and public prosecutors should prevent and fight crime more effectively, otherwise many Paul Kerseys (Charles Bronson’s character in the movie) would actually surface and take the law into their own hands.

Chapter four, the Golden Age of Vigilante Cinema (the 1970s and early 80s), is obviously the highlight of the book; then, Bronson crated a new sort of hero/antihero, and the author cites crime rates and survey research from that time, which are strongly related to the success of Death Wish.

Grant depicts the many ways and motivations for “… the development of vigilantism as a subject in mainstream cinema, from its origins in the Hollywood western through the golden age of exploitation films, from the system-bucking of Dirty Harry-style cops to the professionalized vigilantes of today.”
A wide collection of movies, starting with The Birth of a Nation (1917) and ending with Harry Brown (2009), The Equalizer (2014), and You Were Never Really Here (2017), shows a very detailed picture of film vigilantes of all kinds whose personal approaches and motivations changed over the decades. London-based film historian Kevin Grant presents a solid and well-researched number of 200+ (mostly American) films of the genre.