There are very many books on both the American post-war years and the films of the long 1950s, usually with the emphasis on a genre or a sociological topic. The book at hand, however, has a somewhat special approach, as it is preoccupied with the decade and its implications on the American public, as experienced through the messages and plots of its movies. 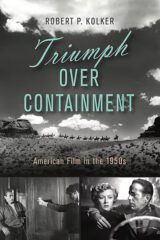 Namely, how identity formation, mindsets and criticism could develop in an air of suspicion, red scare, constant fear of communist, forceful interaction of the media focused on the Hollywood Ten, oppressive norms of Cold War culture, HUAC and anti-American activities, real and imagined.

And how, on the other hand, going to the movies then may have altered the views of American audiences, who witnessed liberal ideas, the effects of witch hunts on persons wrongly accused or  characters who stood up for their beliefs and successfully resisted conformity and repression on the screen.

Robert Kolker, a professor emeritus at the University of Maryland in College Park who authored a number of books on film and its cultural aspects, in personal reviews revisits several classic movies of the era. His particular attention is on science fiction films and the melodrama. There he sees the effects of Cold War culture and “containment culture” prominently at work.

While “containment,” highlighted in the book’s title, originally referred to the Soviet Union and its practice to conquer and force communist ideology on the inhabitants of countries they liberated while fighting Nazi Germany during the war. What originated from terminology of late 1940s US foreign policy soon was applied to American domestic politics in a way. It “… became, almost unconsciously, a warning against liberal discourse, against women, sexual difference, and people of color, against cultural productions that asked the wrong questions or offered the wrong answers, ‘wrong’ meaning left or even just right of center. … Culture, politics, desire itself was contained by the dominant anti-Communist discourse.“

The films consulted to substantiate the major aspects of the politics of fear, forced homogeneity, and containment (some in great depth) are The Thing from Another World, Touch of Evil, The Steel Helmet, Fort Apache, The Incredible Shrinking Man, Imitation of Life, It Came from Outer Space, The Searchers, Johnny Guitar, Two Weeks in Another Town, 2001: A Space Odyssey, Rebel without a Cause, No Way Out, Pinky, Some Come Running, Written on the Wind, The Man Who Shot Liberty Valance, The Lawless, Vertigo, Body and Soul, Rio Grande, Bigger Than Life, In a Lonely Place, Citizen Kane, All That Heaven Allows, Pickup On South Street, The Hitch-Hiker, The Killing, Psycho, Force of Evil, and others.

With such a selection at hand, the title still is “… not an encyclopedia of ‘50s films or a history of the decade but rather a close look at the imaginative work of filmmakers who broke through the oppressive climate of Hollywood in the 1950s. … What follows is less scholarly than it is personal … .“

Kolker approaches this angle on the assorted movies in seven chapters. Naturally, and given the production years, many films noir are on the list, as is famous film noir actor John Garfield in an extra chapter. The book is arranged in a brief overview of the period, several chapters devoted to directors Orson Welles, Sam Fuller, Alfred Hitchcock, Ida Lupino, Joseph Losey, John Ford, the popcultural meaning of science fiction and melodrama films of the decade, and a concluding text on Stanley Kubrick’s Dr. Strangelove or: How I Learned to Stop Worrying and Love the Bomb.

The overall angle here is rather gripping, if we keep in mind that Mr Kolker is in his eighties. So while we learn about the impressions of a film enthusiasts who not only watched those classic movies when they came out, but who also experienced the atmosphere and zeitgeist of the period first hand, we get a somewhat distinctive picture of the 1950s. And it differs from that of the present day theoretical film expert who soberly comments on these works from a different perspective and who will probably also get a ‘different picture.’
Eventually, Kolker concludes, that many films of the decade throughout the genres, “conservative or progressive, demonstrate that containment was no match for the cinematic imagination.” In this respect, Triumph Over Containment is an unusual approach to many American film classics. The personal memoirs of that period in combination with the expertise of a film-buff make it worth reading.