Originally conceived in 2010 as a short-lived project to pair a film enthusiast with the respective scientific expert on the film’s subject after presenting a science fiction movie, the idea of dialogue and curiosity, in cooperation with the Denver Museum of Nature and Science, still is around today. 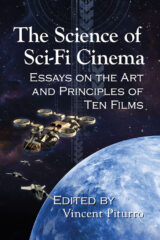 And with each film presentation hosted by Vincent Piturro, professor of Film and Media Studies at Metropolitan State University, CO, and the editor of the book at hand, he now presents this idea of how film and science could meet on the pages of The Science of Sci-Fi Cinema.

At the museum, following the screenings of the film series, a scientist usually would enlarge on the feasibility of the movie’s theme for the audiences.
Or rather, explain whether the film’s story was halfway realistic or if the enterprise and action could be done with today’s technology or what developments, inventions and breakthrough scientific machines would allow interstellar travel, communication with aliens, or laboratory designed monstrosities.
As science fiction films for Piturro simply “present hypothetical futures, featuring imagined technological advancements—not yet realized but perhaps (more or less) plausible.”

As the theater audience over the decades became more interested in the sciences and science-fiction movies, the genre attracted more and more people, so its directors looked for plausible ways of presenting technology in the films. At a certain time, around the 1990s, some directors started to present advanced scientific apparatus and tools in their films; hardware that then was not too far away from contemporary machines and technology to promote a ‘realistic’ outcome and story.

Each movie is shortly introduced by Piturro and then commented on by an acclaimed Denver scientist familiar with current technology, and the fictional advanced machines/technology used and highlighted in the films. Among the scientists consulted are zoologists, Mars scientists, paleontologists, space scientists, geneticists, and astronomers.
Not only do all films feature technology/science as a main actor, in his introductions to each movie Piturro equally strives “to address how each film answers the central question of science fiction, in my opinion: ‘What does it mean to be human?’”

Naturally, several other movies such as Terminator (1984), Alien (1979), Star Wars (1977), Close Encounters of the Third Kind (1977), The Matrix (1999), and others are mentioned throughout the essays, as they all influenced the development of the genre.
Except for 2001, a film that has amassed a huge canon of literature over the years, all texts are rather brief and usually less than 20 pages long. Still, they are all are worth reading, Charles Hoge’s and Joseph Sertich’s take on Jurassic Park and Ka Chun Yu’s musing on Interstellar may stand out at the bit.

The Science of Sci-Fi Cinema is a diverting read, as it takes movie criticism one step further, in this case almost into the lab or close to the lecture hall. Fortunately, the texts hold the balance between information and entertainment, so the layman reader not professionally involved in the disciplines will not be bored with intricate theories or technical jargon.

Vincent Piturro (ed.) The Science of Sci-Fi Cinema: Essays on the Art and Principles of Ten Films. McFarland, 2021, 202 p.