May 11, 2022Written by Shelf Administrator

To understand the impact movies and in particular the American movie industry had since the 1920s, not just the messages, directors or entertaining subjects of the films were important, but also the manner how the product film was presented all over the world. 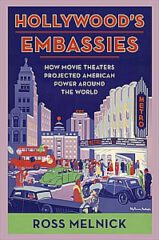 For that purpose, the well-known website Cinema Treasures has collected data and pictures of more than 57,000 movie theaters worldwide, open and demolished that over the decades  entertained millions of people. Many of these cinemas were outside the US, but owned and operated by Hollywood’s top studios. Ross Melnick, Professor of Film and Media Studies at University of California, Santa Barbara, is one of the founders of the project. He has published widely on movie theaters and the American film industry.
In the massive volume at hand, however, Melnick concentrates on the combination of diverse properties that made American movies so peculiar abroad, as American culture, politics, a way of life and the presentation of the films outside the US took place in luxurious, extravagantly decorated and impressive theaters that were designed by the major film companies. Often, hundreds of cinemas also were either company owned or company-run, basically in the national capitals, from Egypt to Buenos Aires. “Hollywood’s Embassies: How Movie Theaters Projected American Power Around the World is the first political, cultural, and industrial history of Hollywood’s ownership and operation of hundreds of cinemas in more than three dozens countries from 1923 to 2013.”

The big players, already before but also after the consent decree, i.e. the 1948 Hollywood Antitrust Case that forbid American movie companies owning exhibition companies such as movie theaters in the US, had an enormous power to attract audiences, particularly abroad. Through their films, they performed better than any marketing agency or administrative reformer in promoting American ideas and democracy, simply by offering a very tempting product: American pictures and glamorous stars.
Such successful merchandise would in turn support and ensure even bigger markets for “… multigenerational and [the] never-ending circulation of Hollywood films and, for the U.S. State and Commerce Departments, a constant flow of American political and consumerist messaging, selling American ideas, products and (soft) power, especially during fractious and wartime periods.”

In that respect, the movie companies never lost their theaters and distribution power outside the US. For example, Twentieth Century-Fox alone owned 155 cinemas across Africa in the 1950s and 1960s. Furthermore, providing their own newsreels, short films, fanfares, and customer service, they created brand identity for returning customers. Audiences remote thousands of miles from the US could briefly ‘enter’ the nation by attending an American theater, let’s say in Lima, and for roughly 90 minutes would witness life in a modern democracy (until the lights came on again). Moreover, the long history of Hollywood’s global cinemas for Melnick functions “…. as a harbinger of struggles to come in the construction of Cold War-era Hilton Hotels, Walt Disney theme parks, and the proliferation of American restaurants and retail outlets overseas.” As the corporations, basically MGM, Warner Bros., Paramount, and Twentieth Century-Fox, together with theirs films exported the theaters and the glamour abroad. This way, a compelling image of the US was presented to audiences in the major cities of the world.

In that respect, the theaters/palaces actually served as “embassies,” the main thesis of the book, that were quite able to have a certain leverage and exercise some power on audiences. The composition indeed meant “… selling a very specific American style of entertainment and politics in which American films, stars, and brands were the exotic allure.” Depending on the respective films, often enough the representation of American culture, policies and citizens from all parts of society undercut the official messages of the real embassies, as intrigue, drama, film noir and crime films also showed the darker sides of the nation.

In six parts, divided into the regions of Europe, Australasia, Latin America/Caribbean, Middle East, Africa, and Asia, Melnick covers and deciphers the nine decades of the Hollywood industry abroad, from 1923 to 2013. For each location, he lists the bureaucratic implications, the corporation’s interests in the respective markets and the history of many most prestigious movie houses.
Each chapter is interesting in its own way, as every region required different tools and strategies, depending of the local audiences, cultural restrictions and even open audience discrimination. The quantity of data here is fantastic, so identifying a favorite part is difficult, although chapter three with the focus on Latin America and the Caribbean may be close.
Generally, the detailed evaluation of the film markets, their developments, partnerships, audiences and political background of the respective countries is amazing and very impressive. As not all countries reacted similar to the mass of imported films, venues, and transported cultural messages and biases, in particular, when the movie subject or setting was a matter of national importance in these regions.

The book’s subject, the films in combination with their means of presentation and distribution, basically was a topic uncovered by academic research and media studies before, according to the author. As the earlier focus generally was on the media, film directors, film production, the script, aesthetic power and actors. For many decades though, before VHS, DVDs, and online streaming services were around, the movie theater was the main and typically only location where audiences and films got together. That important context, says Melnick, usually was neglected so far, thus ignoring film exhibition and connected “local, national, and global affairs.”

This volume is highly recommended for those interested in film studies, theater architecture, global affairs and American Studies and it may easily become a standard title on the reception of American films abroad. The individual histories of particular theaters, the political/economic strategies of certain studios, their distribution chains and the overall effect of the important cultural resources “film” that in lots of well documented details reveal the impact of American popular culture is breathtaking.
As during each decade in every foreign capitol or theater location different religious, national or political forces – in favor or against American political/culture influence – were at work. And several industrial and cultural American practices, presentations of leisure, consumption, equal rights, and at their center the idea of life in a democracy were not exactly welcome at all times.