The three chapters that author Bernardo has created for the book at hand all have their focal point on varying ideas of identity formation, on being either rooted to the past, a memory, in a sense of location, narrative or strong emotional ties – be they human or even Borg in origin. 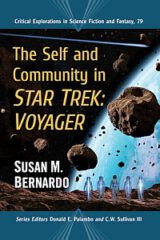 In this Star Trek franchise, the Federation ship Voyager is stranded 70,000 light-years from Earth and has to overcome most fantastic and difficult situations to stay alive while simultaneously not breaching Starfleet rules and the respective code of conduct. As allies are rare and enemies plenty, the crew in Star Trek: Voyager (STV) has to ensure strong ties to keep the community going and must not interrupt personal development.

“An ongoing tension in Star Trek: Voyager, as well as in much literature, film, and television, resides from the friction between the group and the individual. The individual may flourish, languish, or even exit the group depending on how string the relationships are and how well the group works with difference.”

Bernardo, a professor emerita at Wagner College, with an eye for the many unique challenges the crew of the Voyager faces and therefore, focuses on “… memory and self-formation, time travel as a narrative device, building communities and the importance of the dynamic between individuals and groups, nostalgia and costume drama as imaginative tools for self creation, the status of self-aware computer-generated beings, interspecies attraction and the importance of difference, trauma … and the relationship between science and spiritual experiences/beliefs.”

The sections all center on varying ideas of “identity,” people being either rooted in the past, a memory, in a sense of location, a narrative or strong emotional ties – be they human, artificial, or even Borg in origin. Each of the main characters of the show undergoes examination, from Captain Janeway, to Tom Paris, and even holodeck simulations in their interactions with other crew members.

More than in other parts of the Roddenberry franchise, memory and – in a way “ideology,” meaning Starfleet/Federation ideology – plays a huge role. As Janeway’s crew is far removed from the Alpha Quadrant, imaginations, memories and ties to a past that was removed physically and lies in another time are probably the most efficient end enduring ingredients to maintain routine and discipline.
While simultaneously individual crew members develop, change and mature in various ways. The best example, after her appearance in season four and by having her life and character develop rather rapidly is Seven of Nine. Her story, that includes self-reflection, meditation, readjustment, re-localization and development of identity, is what happens to a lesser degree to the main characters of Janeway’s crew. (Her personal style, as mentioned several times in the volume, is described as a “feminist” way to approach obstacles).

The crew’s resilience grows even stronger, as they are either kidnaped, replaced, their minds and bodies or dreams taken over, or they suffer other kinds of “spirit possession,” here not in the guise of ancient cinematic voodoo horror, but always clearly detectable as either scientific apparatus, standard natural psychic power of alien origin or superior mental capacity of a far advanced species.
And still the crew matures, even in the face of persistent obstacles for character development, as often memories get erased (by who or whatever) or entirely replaced as in the case of Chakotay. Other crew members are cloned without knowing; to serve other purposes in other societies. Seemingly human and Federation DNA is most welcome in the Delta Quadrant. In most cases, the crew regained control over their minds and bodies, usually because strong ties and their combined individual skills offered solutions.

Associated with the concepts of self, identity, traditions, memory, rituals and shaman practices, the show features ideas of the supernatural and spiritual energies. While ideas and characteristics of religion and spirituality are most prominent in Star Trek: Deep Space Nine, here in STV they also are of some importance. (Considering the basic lack of the supernatural still in STNG, it is worth noting that both series following Picard’s adventures come to understand the importance of spirituality for audiences and made it an important part of the show).
Several episodes of STV also deal with various ideas about an afterlife, or stages encountered that lead to it; naturally, these plots also are highly spiritual. “While the series does not espouse any particular religious doctrine, it does consistently support the idea that people have the right to their beliefs and that these beliefs, at their best, do not have to conflict with science. …. The right of the individual to belief often appears as part of a larger culture that supports the ideas that help complete a world for the person involved …”

The Self and Community is another welcome addition to the literature about ideas about the self, identity, forces that keep a spacecraft (or space station) crew together, no matter who or what tries to eliminate the strong bonds within a mixed Starfleet crew. Their individuals, however, are what make the crew such a rich reservoir for trouble solving at this new last frontier.

Susan M. Bernardo. The Self and Community in Star Trek: Voyager (Critical Explorations in Science Fiction and Fantasy, 79). McFarland, 2022, 187 p.

The Return of Twin Peaks: Squaring the Circle by Franck Boulègue (2021)

There is little doubt that the TV show Twin Peaks, the brainchild of David Lynch and Mark Frost, was a very special project. This was true for the original series (1990 – 1991) that consisted of two seasons and left millions of enthusiasts hunger for conclusions, as many open threads remained and in the show […]