When in 1968 Japanese low-budget director Seijun Suzuki was fired by the Nikkatsu production company, it seemed to be the end of a so far fantastic career in the movies. 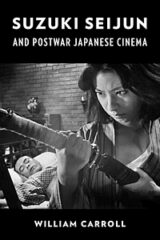 Between 1956 and 1967 Suzuki made forty films there; some of these were quite successful. While for Nikkatsu Studios, it obviously was just another personnel decision, mostly based on the inability to keep the director with the strange ideas under control, for certain parts of the Japanese audience this became known as the “Suzuki Seijun Incident” (in Japan it is the custom to state the family name first).
It would be the beginning of a rather heated debate about aesthetic and political issues concerning national cinema and politics. His “dismissal became a cause for leftist student protestors and a burgeoning group of cinephiles to rally around.” In the ten subsequent years, Suzuki (1923 – 2017) was even blacklisted and directed no feature film for cinema.

His 1967 film Branded to Kill, a story of a hired hit man who in a bizarre and complicated plot finally is on the rum from those who hired him, turned out to be a financial disaster and seemingly was the reason for his dismissal. Needless to say that a few decades later that movie and many others he directed would be rated as a masterpiece, inspiring directors like John Woo and Quentin Tarantino.
At that time, however, his former bosses accused him of delivering “incomprehensible movies that made no money” for Nikkatsu, the country’s oldest film company, founded in 1912. (A statement Suzuki quoted in interviews and that was incorrectly attributed to himself and seemingly explained his later lack of success.) He continued to work for TV, made several commercial clips, and was also involved in the animated TV series Lupin III. In 2005, he finished his last movie, Princess Raccoon, starring Chinese actress Hang Ziyi.

In order to categorize Suzuki’s work, author William Carroll, a postdoctoral associate in the Department of Asian and Middle Eastern Studies at Duke University, starts his meticulous analysis of the filmmaker’s output throughout the years. Suzuki begun his career in 1949.
Naturally, Carroll goes deep into the distinguishing characteristics of the Japanese film industry first. As, on the one hand, it was in part influenced by European and US markets and directors, but also employed numerous traditional themes, characters, traits, tales from national history and folklore, and aesthetics derived from Noh and Kabuki practices. Until the early 1950s, Japanese movies were rather unknown in the rest of the world.

Maybe the most intriguing sections are chapter three and four. Chapter three, “Postwar Japanese Genre Filmmaking and the Nikkatsu Stylistic Idiom” is devoted to the different historical and thematic changes Nikkatsu went through. Thereby explaining and highlighting the many styles Japanese directors in their domestic golden period of postwar film making went through. From “Kayo” films – “ballads” – to the Japanese version of US film noir and westerns, melodrama, youngster/juvenile action films and others.

Suzuki’s output added to those genres, usually introducing his style in terms of photography or composition. This includes the input of members of the “Guryu Hachiro,” (“Group of Eight”) a team of writers from cine-clubs, fans and others impressed by Suzuki’s movies who provided screenplays for his productions.

The genre probably mostly associated with the director, however, was the violent gangster (“yakuza”) movie; although Suzuki usually meant for his characters to over dramatize the clan members and have them present almost a parody of the genre. Most retrospectives of his work feature his titles Youth of the Beast (1963), Fighting Elegy (1966), and typically his colorful pop-art masterpiece Tokyo Drifter (1966).

Chapter four, “The Emergence of the Sejunesque” highlights his artistic gadgets and genuine aesthetic inventions, such as the powerful internal monologue of his main characters, specific color schemes, nested diegeses and meta-cinematic miniature films-within-films, highly contrasting depths and distances, his almost strategic use of mirrors, reflections and extreme deep-focus shots. These two parts alone are very enlightening and reason enough to acquire the title, as they determine Suzuki’s mode of directing in near perfection.
Simultaneously those chapters unfold how the two factions, the allegedly apolitical cinephiles and the New Left tried to woe, protect and even exploit the director and his films for their own purposes and political/theoretical aims.

It is fascinating to follow Carroll how he reconstructs old claims and academic reasoning of the 1960s that were based on contemporary ideas of European film theory that in Suzuki’s case were intended to limit a creative genius to a handful of political and aesthetic features.
“Throughout his career, Suzuki’s creative exploration of cinematic form allowed him to reinvent himself stylistically as he adapted to technological shifts in the medium, to broad shifts in the Japanese film industry, to shifts in his own place in that industry, and even to shifts between live action film, television, video and animation. It also made him an artist well worth stealing by film theorists and filmmakers who wanted to claim him, and the potential that his experimentation unleashed, for their own.”

All five chapters add up to roughly 160 pages of text, while 100 extra pages are devoted to extensive additions. The titles offers with a complete filmography, sorted by the English title (followed by the original Japanese title) and further appendices that list movie collaborations, Suzuki’s work as assistant director and for the first time an overview and plots of his unfinished film projects (such as the never realized Branded to Kill Continued, conceived in 1967).

Even though this is not the first publication on the great director, it shines some light on previously underrated aspects of his aesthetics. The essence: Suzuki was not just another exotic and mediocre filmmaker. This study proves the opposite and presents his unique style and lifelong fascination with the nature of the cinema itself, including the many cross-references and its technical impossibilities Suzuki tried to outwit, while the enclosed filmography is a welcome addition for future research.

The Women of Hammer Horror: A Biographical Dictionary and Filmography by Robert Michael Cotter (2021)

No matter how a casting for British Hammer Film Productions – Europe’s epicenter of crude horror and gothic films between the 1950s and 1970s – ended, to be invited in the first place, as an actress, you had to be extremely beautiful with a bosomy figure to remember. And even if those women on the […]

To understand the impact movies and in particular the American movie industry had since the 1920s, not just the messages, directors or entertaining subjects of the films were important, but also the manner how the product film was presented all over the world. For that purpose, the well-known website Cinema Treasures has collected data and […]