The Kinks: Songs of the Semi-Detached by Mark Doyle (2020)

For all of those Kinks fans interested in a biography or personal history of the Davies brothers: this book will not satisfy you. 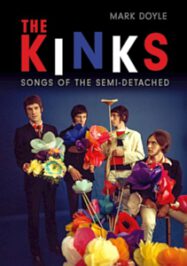 However, as there is no lack of either Ray Davies or Kinks biographies, this title has something else, something better to offer. Centered around the idea of conceptual pairs that differ tremendously in their approach to life, London, the pop craze of the 60s, fashion and what not, author Mark Doyle examines the Kinks’ world and Davies’ way of songwriting by unveiling the many opposing positions he takes while telling his stories. Mostly, however, Ray felt as the preserver of the simple English people: “The Kinks’ relationship to working-class England is the central concern of this book.”

Those pairs also inform the altogether five chapter where, for example, they appear as ‘The Kinks vs. Swinging London’ and ‘Muswell Hillbillies vs. Big Brother’ (here focusing on the stubborn cockney drive for independence challenged by post-war government programs transforming the city).
A central approach of the author obviously is to give a detailed account of why a great number of Ray Davies’ compositions are heavily influenced by English post-war popular culture, class differences, politics and characteristics of London (that ‘sense of place’), Greater London and actually all of England. The chapters are about “… the odd angle from which [Ray] Davies viewed his world. Although he and the other Kinks had deep roots in a particular social milieu (post-war, working-class north London) and participated in a distinctive cultural moment (the British pop explosion of the 1960s), they were never fully a part of either world.” In this respect, many of Ray’s compositions, in fact, are ‘semi-detached’ as the subtitle suggests, and this does not just refer to the house the Davies family of ten lived in after they left central London.

As the Kinks were not the typical R’n’B influenced British beat band, neither did their lyrics (except for their first two albums) focus on the usual teenage dance, love and party themes. Mostly penned by brilliant singer and band leader Ray Davies (who received a knighthood in 2017), their songs reflected on themes of national identity, habits, traits, the meaning of family and class bonds of decades long ago, sometimes even Victorian and Edwardian (with musical quotes of the music-hall). And listeners could never be too certain whether the lyrics were straightforward pasquinade, sarcasm, critique, praise, or irony related to current domestic affairs, politics, taxes and hypocrisy.
Alternatively, they depicted a longing for togetherness, working-class communities and disappointment with modern society and life in urban England. With complex songs and lyrics thematically rooted in those worlds, the Kinks certainly in their more than 30 years of studio and stage action were one of England’s most important bands, and influenced countless other musical groups, not just the 1990s Britpop chart wonders, until today.

All of that, however, is part of Kinks lore and history. Nevertheless, as Mark Doyle points out, his aim is to situate the Kinks’ songs within these “deep traditions of English art and thought, taking in such figures s William Hogarth, Edmund Burke, John Clare, Charles Dickens, George Orwell and John Betjeman. … [T]o bring their originality into sharper relief.”

A good and unusual title that once again confirms the band’s unique standing in the history of English rock music. Even though many ideas and possible explanations for the singer’s sarcasm are listed, particularly those concerning Ray’s ambiguity, lament and double-entente in most of his brilliant lyrics, there is no easy answer to why he formulated all of those lyrics in that manner. The historical and nostalgic character of Davies’ songs is captured excellently, though, as are the strong differences in the outlook on life, the pop business and other topics between Ray and his outgoing, heavily partying younger brother Dave, playing lead guitar. Which again is a ‘semi-detached’ aspect of the band and its music.
All in all, this is a study of post-war Britain and Ray Davies’ personal struggle to get along with changing attitudes, fashions, government regulations, deteriorating housing situations, and disintegrating families and communities. Those many challenges, clearly bothering a sensitive mind like his, are emphasized by the author, for example, concerning Ray’s typical smirk on a multitude of band photos. This facial expression would be the equivalent of the ironic lyrics that often take on a number of meanings. In Doyle’s view, it exemplifies the singer’s changing moods and conclusions and goes hand in hand with his invention/creation of different personas who tell their respective stories (for example on the album ‘Arthur’), acting as substitutes for a Ray who was either too shy or too insecure to communicate it in his own voice.

Actually, the 200 pages of running text are about Ray Davies and his songs in historical context. Thematically the book ends in the late 70s (even though the Kinks continued until 1997) as the band then cut the close ties to north London where it formed in Muswell Hill in 1964.
Drawing from many fields such as sociology, psychology, theater and even city planning, the title is also a philosophical approach to the music of the Kinks. Very recommended reading.

The story of The Who, a band that stared out as The Detours and the High Numbers, is probably the best example of a group that combined an innovative stage show that incorporated ideas borrowed from art theory with a strong dialogue directed at a style-minded fan base and consumer culture. “Across The Who’s first […]

What was set up as a somewhat risky experiment featuring unusual approaches towards audiences, concepts and TV viewing habits, the live broadcast of the London based production Ready, Steady, Go! became probably the best pop TV show ever. As it united a fresh concept of live music (although until 1965, bands were only miming their […]

Only a few recent local dance scenes gained enough influence on a global scale, so they could be called some sort of movement; with powerful and addictive rhythms, strong horn sections, strings, highly emotional (shouted) lyrics, an overall richly decorated studio sound, a positive outlook (in the lyrics), a genre of late-1960s soul music, played […]