Excavating Indiana Jones. Essays on the Films and Franchise by Randy Laist (ed.) (2021)

The stories of the fictional archaeologist and adventurer Dr. Henry Walton Jones Jr. drew millions to the movie theaters, as his tales, for one reason or another, satisfied a number of interests altogether. 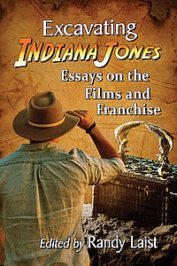 The protagonist, better known as “Indiana Jones” on his quests, followed a very simple and classical pattern of adventure and mystery stories, often associated with pulp novels and cliffhanger series, that necessitate extensive travel, the occasional rescue of a damsel in distress as well as combat against stereotypical Nazis, hoodlums, thieves and peddlers of priceless ancient artifacts. Not only depending on his wits and university education, but also using his whip and fists, “Indy” perfectly follows the paths of classic pulp heroes and B-movie characters such as Jungle Jim, Kit Carson, Ace Drummond, Agent X-9, Dick Tracy and even Tarzan.

The tale’s hero, a character conceived by George Lucas, debuted in 1981 with Raiders of the Lost Ark, directed by Steven Spielberg, successfully located the Holy Grail, The Ark of the Covenant, the missing Sankara Stones and a crystal skull from outer space. Raiders was followed by three additional movies starring actor Harrison Ford and the Lucas/Spielberg team and an excellent spin-off TV series The Young Indiana Jones Chronicles (1992 – 1996) with River Phoenix, directed by George Lucas.
But not just movies featured the character of the adventurer/treasure seeker/hero; several other products of popular culture, such as Marvel comic books, novels, toys, Lego sets, video games, merchandise of all sorts, and theme park rides have emerged since 1981. The franchise surrounding Indiana Jones is impressive and use of the theme seemingly was inevitable, as in 2012 Disney bought Lucasfilm and soon started to market also this “high concept” filmmaking idea from the George Lucas universe.

Indiana Jones, depending on your point of view and the political agenda at work, on his quests either empowers and represents stereotypical forms of either colonialism, intercultural encounters, “racist impressions of Eurocentric imperialism,” manifestations of conservative American values, or acts as a fascist as well as an anti-fascist icon. However, by 1999 the character of Indiana Jones and his workings had attracted wide attention nationally, and the Library of Congress officially identified Raiders as “culturally, historically, or aesthetically significant” and selected it for preservation in the National Film Registry.

Excavating Indian Jones takes a closer look at many features of Indy himself, as well as on ways of reading and classifying his adventures. Editor Randy Laist, a professor of English at Goodwin College in East Harford, has assembled a group of contributors who focus on a great number of aspects. The book is a “… component of this vibrant discourse, and the essays in this collection are intended to advance the ongoing cultural debate about Indiana Jones and what he means. … Whether you think of Indy as a ‘reluctant hero’ or a racist imperialist, a monomythic archetype or a marketing ploy, an icon or a travesty, or as any combination of any of these interpretations, the essays in this book provide arguments that will both enhance and challenge your way of thinking about this indisputably influential cultural icon.”

At the center, we have four cardinal themes. First, the fictional/pulp fictional image vs. historical reality of (American) archaeologist of the early 20th century and their ways of locating, attaining and preserving artifacts from ancient cultures, to be stored in (usually American) museums. The following chapter addresses representations/misrepresentations of non-Western cultures and people, particularly those of remote or oriental decent; it is here where much justified or unjustified criticism is directed against Spielberg and Lucas. Chapter three considers Indy’s identity, character, gender status and search for (possibly several) father figures, while the last section describes the commercial exploitation of the character in other media, Disney theme parks, memorabilia and merchandise.
A very entertaining read for fans of classic adventure tales, pulp stories and their recreation in the 1990s as well as for audiences interested in cultural studies and their workings.

The three original parts of the Star Wars saga (later renamed episodes IV, V and VI) were masterfully documented and praised in film historian Paul Duncan’s The Star Wars Archives. 1977–1983 in 2018. The new, second documentary volume on the space opera will enhance the view on the three prequel films. On 600 pages, Duncan’s […]