I Died a Million Times: Gangster Noir in Midcentury America by Robert Miklitsch (2021)

In his current title author Robert Miklitsch goes on a long excursion to introduce several classic 1950s movies to identify and in a way separate the gangster films of that period from the films noir. As not every gangster movie automatically was a film noir, neither did all contemporary noirs feature one or more gangsters. 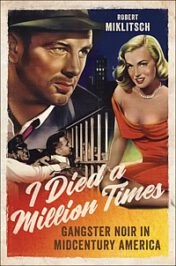 He clearly delineates “…one topic that informs this book: the vexed dialectic between the individual and the collective in the 1950s crime film. … I Died A Million Times may be construed as an argument about the 1950s or, at least, how ‚the Fifties‘ have been remediated. The syndicates, rogue cops, and ‘big capers’ that populate the ‘50 crime film suggest that the mid-century America understood as the ‘happy days’ of the republic is a fiction.”

In the US of the 1950s already an internalized idea of a threat was widely popular. A menace that in the movies of the decade before was visible and clearly identifiable: The Germans, Japanese and their allies from the many war theaters.
Even their spies and helpers on continental US hence were rather easy to spot, very often in connection with crime, of course. Those clear targets of the 1940s crime movies, however, in the next decade changed into a different, and due to their “invisibility” as next-door neighbors, colleagues at work or politicians with plans of their own, far more dangerous variant, as “the red menace” would take on many disguises to attack the American way of life. Now, the criminal, acting alone or as part of an organization (described as an octopus with many arms and branches), would be a gangster and/or a Communist.

By arranging the chief themes from films from the period in three categories, syndicate/organized crime, rogue cop and the heist picture, their principal attributes, history, cultural politics and production are presented by Miklitsch, who has published on film noir before. Those three sub genres he identifies are broken down into chapters and each movie, and there are quite a few mentioned in the 290 pages, is crucially tested in terms of another main argument of the book: how do the films dramatize and present either an organization that is a threat to society and the state or the individual criminal/gangster of that era.

This is of significant, as gangster films of the 1930s, for example, usually presented the conflicts related to the individual gangster; compared to that decade, the criminal of the 1950s was very often a member of a syndicate or even a promoter of a dangerous ideology, which in post war American would mean communism. While not all of those criminals willingly participated in the rackets, but nevertheless, were parts of such enterprises.

Gangster Noir in Midcentury America starts where most books on film noir end, namely by listing certain titles, and breaking up their plots. The huge (and historically correct) impact on mob action, large-scale criminal organizations, often connected to communist agents who in the movies not only went for wealth but for ideological influence, is brilliantly uncovered. And the antagonist of the mob organization, sometimes a rogue cop, equally gets in conflict with the law; as did the protagonists of the heist film in chapter two of this book.

Miklitsch’s book is gripping, as he also adds background from the history of mob families, mob hearings broadcast on TV, crime statistics, mob/industry/law enforcement connections, mobster and detective interviews and best selling publications. So the many facets of the individual versus the system or the one system against another one (in that case a mob/gangster syndicate) get a lot of attention. A good addition to any crime movie and film noir library.