Man’s curious nature that powered the exploration of the seas, jungles, and deserts of the planet finally also led him into extraterrestrial territories. However, long before the first satellite or test probe even got close to the moon, other ways of purely fictional exploration were at work. 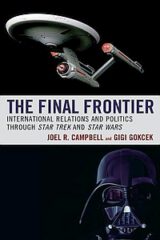 Prominent in the approach to understand and categorize space and promote dreams of a better future with new knowledge gained from exploring, naturally several themes from science fiction, at first just stories and books, later movies and TV series, came into play. As that genre deals basically with ideas of (slightly up to extremely) different forms of society, technology and relations to others, even alien life forms.

And due to their impact as national broadcasts or blockbusters, those sci-fi productions had an enormous educational potential, if you managed to uncover it behind all the action that took place in the episodes. And naturally, plots, situations, drama and emergencies from the fictional worlds were related to, and often, in fact, inspired by conflicts, wars, debates and clashes of political systems in man’s history, ancient and recent.

With the two huge franchises Star Wars and Star Trek, also different kinds of liberalism and neoliberalism were introduced as driving forces behind many of the respective protagonists, say authors Joel R. Campbell and Gigi Gokcek, both assistant professors of political science. Their seven chapters thus, in one way or another, discuss international (and intergalactic) relationships, as “[b]oth franchises invite the viewer to think about old problems in new ways. Both have evolved with the times, and are amendable to examination through … varied lenses … Star Wars soared from a relatively simple good vs. evil story in 1977 to a complex interweaving of narratives in 2017, and Star Trek jumped from an optimistic Western-in-Space in 1966 to complicated psycho-drama in 2016.”

While the first three sections introduce key moments, political thought and definitions of liberalism/neoliberalism in Star Wars and Star Trek, chapter four explores George Lucas’ vision of a changing America over the decades, with respect to realism and forms of liberalism. With emphasis on Star Trek, similar questions arise in chapter five, even though there are massive differences between the Star Trek series, as for example Deep Space Nine presents a very different sort of realism than probably Star Trek: Enterprise.

The following chapter is maybe the most interesting part, as it deals with forms of radical theories and principally variations of Marxism in the two franchises. And what happens whenever they meet with liberalism and a humanist outlook; here, the uses of (science) fictional plots can be easily connected to today’s problems or ideological clashes as they happen on the planet.
“The two republics [the Empire and First Order in Star Wars] can be viewed as bourgeois societies that do little to attack these vast economic differences. Constructivism would note the changing values, ideas, norms, identities, and institutions in the three trilogies, which in turn reflect the ongoing changes in American and Western politics, international relations, and foreign policy from the 1970s to the 2010s. … Star Wars also is a useful tool for pondering environmentalism, as the galaxy contains a dizzying array of different planets with remarkably different ecosystems. … The original series and all four 1980s to 2000s Star Trek TV series can illustrate radical/Marxist and constitutive theories. For instance, all have episodes pondering inequality within societies and environmental issues.”

The final chapter expands the science fiction approach to international relations and communications, as the text here considers a third science fiction tale, namely Glen A. Larson’s Battlestar Galactica in its two TV incarnations. As it basically deals with the journey of a fugitive fleet, carrying the last of another human race on a few space crafts escaping a merciless robot civilization all through the galaxy hoping to find Earth, an approach to mostly failed cosmopolitan relations is highlighted in that series. Usually, the three sagas do not receive attention in a single academic publication. “We limit this discussion to one franchise for comparative purposes. … The first one-season series plays on Cold War and Middle East fears, … the second series … deals with various post-9/11 issues, such as oppression of unpopular minorities, torture as an instrument of war and insurgency against unpopular foreign occupation.”

The Final Frontier is a noteworthy title on two (or rather, three) successful science fiction sagas, that show conflict, diplomacy, tactics, and retreat in times of war and peace, international relations reflected on planets far away, even though actually happening all over the world at any moment. As Klingons, The Marquis, Ferengi, Changelings, Cardassians, Borg, Gungans, Jawas, Hutts, Kaminoans, Wookies, Neimoidians, Sith, and even Cylons in their actions and policies differ not so much from certain agendas in human behavior.
Another addition to critical studies on Star Trek, Star Wars and the interpretation of conflicts and their resolution. Even though the textbook-for-students character sometimes may interrupt reading.