Star Trek and the British Age of Sail: The Maritime Influence … by Stefan Rabitsch (2019)

The overwhelming success of Gene Roddenberry’s Star Trek stories to a large part is based on his good instincts to tell adventure stories in ways familiar to audiences, in this case man against nature (or the incalculable risks) while cruising uncharted regions not of the Pacific, but space. 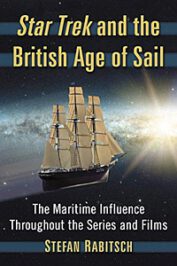 Author Stefan Rabitsch in eight chapters advocates his impression of Star Trek as an extended collection of seafarer tales. Thereby he strongly opposes the popular idea of the series, and its science fiction universe connected to it as basically a new version of the Space Western. (That idea, however, is commonly attributed to Star Wars, of which George Lucas said it was a “space opera,” based on countless western movies, when he tried to interest studios for his first film of the saga).

In Rabitsch’s words Star Trek is actually more what he calls both a version of “Hornblower in space” and – the 1960s TV series – “Wagon Train.” (Captain Hornblower, a fictional hero serving in the British Navy during Napoleonic wars, in eleven novels penned by British author Cecil Scott Forester published between 1937 and 1962, was extremely popular and his tales sold by the millions).
The updated Hornblower by the name of either Archer, Kirk, Janeway or Picard accordingly faces similar tasks, quests and fights battles in the new regions ‘where no man has gone before.’ All of their adventures and all incidents on their respective missions can be taken as updated versions of logbooks from the 17th and 18th century, with entries by James Cook, Columbus and other seafarers.
“Star Trek is modeled on the world of the ‘British Golden Age of Sail’ as it is commonly found in the genre of sea fiction.” And consequently, as Star Trek is American in origin, “the Star Trek continuum is governed by two distinct yet interrelated and compatible these – the frontier and Rule Britannia. Together, they form a transatlantic double consciousness as the heart of Star Trek.” So the series is the one exception in the usually employed aeronautical paradigm that informs practically all major American science fiction films and TV shows.

For his thesis Rabitsch identifies “five maritime dimensions” at work in Star Trek. They “encompass operational discourse, nomenclature, visual and conceptual aesthetics, and character archetypes as well as rituals, traditions and an entire maritime milieu.” For example, the fifth maritime dimension is identified by Star Trek’s future world in space that “poses as Neo-Enlightenment, which is informed by romanticized voyages of discovery and their supposedly benign and disinterested forms of exploration.”
(Observant watchers may recall that in the very first episode of Star Trek: The Next Generation, Captain Picard on the new Enterprise is confronted by one incarnation of the mysterious godlike super being “Q.” His appearance, manners and outfit are that of a 17th century sea captain, and he approaches Picard with “I present myself to thee as a fellow ship captain.”)

On 230 pages of text, a quite interesting interpretation of the series and its mechanisms is revealed, loaded with tons of information, quotes, links to etiquettes of the US and British Navy and, for the first time, a multitude of primary production materials such as set memos, guidelines and altered dialogue and plot sheets straight from the studios.
“Guidelines for writers and directors also revealed that the space-borne sailors observe naval traditions and rituals which date back to the time of Nelson and Drake. As much as they serve to highlight that transatlantic cultural continuum between Britain and the U.S. by way of a shared set of naval traditions, they are also used to draw a validating parallel between life in space a romanticized life at sea.”

Rabitsch, assistant professor of American Studies at the University of Graz, excluded the “new” Star Trek reboot movies starting with Star Trek (2009) from the survey, as they strongly differ from the original series and hence the latest films have very little naval and maritime content. His investigation also shows the narrow margins and the lines that were not to be crossed by whoever produced the shows, as series inventor Roddenberry made it clear that certain things, routines and motivations concerning the character of any Starfleet officer were not to be altered too much (all based, of course, on the character of the glamorous fictional British navy officer and gentlemen).

Stefan Rabitsch. Star Trek and the British Age of Sail: The Maritime Influence Throughout the Series and Films. McFarland, 2019, 239 p.