Broadcasting Hollywood: The Struggle Over Feature Films on Early TV by Jennifer Porst (2021)

Even if the topic of Porst’s book, with regard to today’s video watching agenda that includes streaming media, Netflix, or any Internet-based platform consulted to watch movies, documentaries or series, may look a bit outdated at first sight, Broadcasting Hollywood actually is a highly interesting study, as it chronicles how we as audiences originally “learned” to consume TV video content. 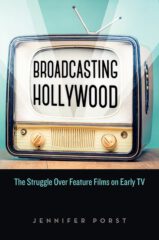 The title deals with an era long ago, namely the 1940s and 1950s. But the transitions of one media type to be consumed in another one, then and today, were informed by many legal and aesthetic details, some still of great importance these days.

Jennifer Porst, an assistant professor of media arts at the University of North Texas in Denton, spent years digging through archives, journals, trade papers, personal correspondence and most of all case files, FBI files (for investigations of US v. Twentieth Century-Fox, et al.) and various other lawsuits to reveal the first important struggle between a number of parties when it came to exploiting content originally produced for one media (Hollywood feature film) in another media (TV).

She argues that “… it took until 1956 before Hollywood’s feature films appeared on television, not because of the long-held assumptions that the film industry was either apathetic or hostile to the nascent television industry, but rather as a result of a complex combination of industrial, social, legal, and governmental forces.”
At the core of the complicated process of one technology and copyright system adopting and/or replacing the other, she sees the conflict of two approaches that in such clashes are competing, namely the sustaining and disruptive technologies. Sustaining technologies foster improved product performance, while disruptive technologies “bring something very different to the market than was previously available.” Which results in cheaper, smaller, simpler and more convenient to use products.

And right there the parallels to today’s TV and media consumption become clear: just as we watch content produced for (cable) TV on the Internet or via streaming media, a very similar transformation and migration already happened decades ago. Only that in the 1940s the struggles were harder, fought with more heat and for a long time it did not look as if, for example, two legendary TV cowboys would ever ride across your TV screen at home. Since before bonds and partnerships between the two mediums Hollywood feature film and television were established, most content broadcast on American TV earlier than 1955 was either foreign or was produced by independent films companies.

Chapter 1 of Broadcasting Hollywood introduces aforementioned disruption forces, central players in the pre-1955 years, the media’s industrial structures and the role of government regulations, while chapter 2 enlarges on changing audiences in a mid-Century America, the Paramount Antitrust case and different kinds of content available, now even in color. Chapter 3 is devoted to debates on copyright and the claims of unions and laborers in the new age of TV.
The fourth chapter goes into detail on claims of two major actors/country musicians and their struggle to retain their rights over their films and who engaged into lawsuits with Republic Studios, namely widely popular Hollywood screen cowboys Roy Rogers or Gene Autry. As this section actually goes to the very essence of the matter and covers basically all aspects of the book, like what meeting ended with what contract, what letter stirred interest in what other negotiations or partnerships, rerun deal, distributing plans, film editing or merchandise contracts that went with it. This is unquestionably worth reading.
The last two parts deal with antitrust law, legal challenges for the Hollywood studios of the 1940s and 1950s in chapter 5, while the final steps in licensing and sale of these feature films, audience demands, and the entire transition of content from one medium to another are contemplated in chapter 6.

The title is a very elaborate catalog of how creative production and reception, as well as means of production, copyrights, the rights of actors and screenwriters, stake holders and corporations, have changed and what new agendas, state regulations and the updated social properties of media consumption did to alter the value and reception of the media for the second time within roughly 100 years. Scholars of American copyright law, media studies or TV history will be pleased. And quite aptly the book – whenever lawsuit files and interviews are quoted in longer sections – also may remind readers of a courtroom (TV) drama with different camera angles and flashbacks.