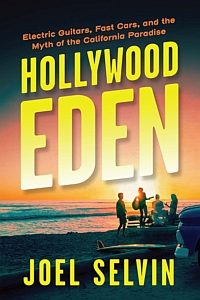 When with what he calls the “University High School class of 1958” the groundwork for the powerful American pop music of the 1960s and 1970s was laid, as some of that group of graduates would forever be linked to the California pop sound.
The state with its unique surfer scene, warm climate, open-mindedness towards brand new trends and youth culture seemingly was the perfect place for the most important new developments in US popular culture of the 60s. And Los Angeles, Hollywood and San Francisco stood ready to supply thunderous impulses that were heard all over the country and Western culture.

Selvin, who has published diverse titles on important American musicians and phenomena of the creative decade of the sixties and the San Francisco area, can rely on his excellent knowledge of the scene. Hence the names of authors, producers, agents, sound engineers, recording companies, record labels, promoters and hundreds of people from showbiz and the media pop up easily in the altogether 21 chapters.
Most of the future stars in the book were either born and raised in L.A. or nearby or they moved there to make it, either in Hollywood or start a career in show business, even though there was just a handful of record labels and studios around by the end of the 1950s, with Capital Records as the only major company. Many of the teenagers of the 1958 class were from well-to-do families with good social standing and more often than not were, in one way or another, affiliated with movie studios, media production, promotion or distribution and had ties to stars and agents. To know the right people was essential, as several protagonists featured would find out.

To list them all as they appear in the three sections “Dawn,” “Daylight,” and “Dusk” would take several pages. The section titles, moreover, perfectly describe the quick rise and decline of trends in music, popular culture and stardom in general, as they stand for the arrival of disillusion at the end of the 60s, opposed by the high hopes for artistic, political, and social change at the beginning of the decade.
An excerpt of that list would include Nancy Sinatra, Sandy Nelson, Kim Fowley, Jill Gibson, Tommy Sands, Jan & Dean, Bruce Johnston, Phil Spector, The Byrds, The Mamas & The Papas, Brian Wilson, Kip Tyler, Kathy Kohner, and Lou Adler.

Those individuals from Greater L.A. and Southern California cities for the years to come would be found in Billboard charts, studios, movies and other records of American popular culture.
Selvin’s approach is arranged by picking a single character, who usually was a teenager in the late 1950s, and then follow them in the years to come after graduation from University High, Santa Monica. This institution was a training terrain, it seems. A sort of pool for incredible talent that only needed to be promoted. Making it big in California, by either having the talent, or swindling your way halfway into the music industry, was rather easy back then, it seems.

Considering the mass of future artists highlighted here, a deeper analysis of their catalogs was hardly possible, as it would take several hundred additional pages. Instead, readers witness the humble beginnings of many successful careers in music and other cultural goods, all being necessarily connected to the “California Paradise.”
Which, after all, was basically a myth, as the last chapters from the book could tell. Success would not always come easy or stay forever, notwithstanding sunshine, connections or endless summers, even in a state where everything seemed possible. So several biographies also embraced disappointment, personal disaster, accidents, fraud, terrible failures, violence and deceit by the end of the 60s.

Hollywood Eden may not reveal the last secrets of those protagonists; furthermore, most of their stories already have been told before. However, Selvin’s style and his arrangement of biographies, incidents, random meetings with immense consequences in the microcosm of Greater L.A. make it hard to put the title down, as it reads like an action-packed movie script.
A welcome annex is the “Playlist” that will facilitate grouping the various bands and songwriters encountered in this chronicle of a most Californian decade. (This review covers the first 2022 paperback edition. The book originally came out in 2021).