In 2017, the first episode of the science-fiction series The Orville premiered on Fox. So far, two seasons of the space adventure show that never denied its relatedness to 1990’s Star Trek, exist. The TV series immediately was described by critics as something between a parody, homage, fan fiction, Star Trek rip-off, and bad copy, to name but a few impressions. 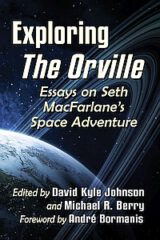 The Orville is the brainchild of writer Seth MacFarlane, who in addition is successful as the author of American Dad, The Cleveland Show, and Family Guy and as an actor, with two brief appearances as an engineer in Star Trek: Enterprise.
He also plays the main character, Captain Ed Mercer, commanding a mixed human and non-human crew on the Union star ship Orville, very much like any incarnation of Captain Kirk of the Star Trek universe. (To ensure good visuals, effects, stories and production, MacFarlane hired several Star Trek writers, actors, technicians and camera men. For them, it must have felt like being back on the set in the 1990s again.)
His show generated a lot of publicity even before broadcast. Still, after several reruns, the series is resisting generic classification. Besides, it is very funny and appeals to vast audiences, even to those so far not familiar with Star Trek.

And just like Star Trek, The Orville has been very helpful and was a great tool for teaching audiences various aspects of science. As almost each Star Trek episode, in one way or another, is related to a scientific or social principle, be it physics, biology, sociology, psychology, international relations or philosophy, so is every episode of The Orville. Both shows demonstrate principles and theories in action while avoiding stiff and boring constructs and manifests. On the contrary, they promote that information in the plot, almost unnoticeable, be it in an action-packed episode or a minimalist setting with just a few characters who evaluate their chances of solving a particular problem while confined to a single room or with little equipment, like in a play.

Star Trek paved the way for that, and any serious student of the show (The Next Generation, Voyager or Deep Space Nine) would probably confess that there was not a single bad story over the years, and that each episode was focused on a specific problem more or less related to mankind of the future or the present.
MacFarlane’s Orville continues this entertaining concept, and today his show simply is “the better Star Trek,” as the latest series of the franchise, Star Trek: Discovery, turned out to be a massive disappointment, even despised by long time fans, due to absurd and overstated emphasis on gender themes and female superiority. Those aspects unquestionably would not be part of the traditional Star Trek universe.

So if asked for the best supplement series, as The Next Generation was terminated in 1994, many observers would name The Orville as the finest alternative. One important question, not just for hard-core trekkies, would be: is it new, is if fan fiction and is it even remotely part of the Star Trek canon? However, at least it keeps the spirit and the DNA, so to speak, of the original series alive and would not sacrifice it for questions of sexual identity.
To identify The Orville‘s DNA, editors David Kyle Johnson and Michael R. Berry assembled altogether twelve authors from various academic disciplines such as philosophy, theater arts, gender studies, bioethics, mass communication, humanities and international affairs. They, in five “Acts,” discuss a number of major topics informing The Orville. The main concerns are gender, sex, and feminism in Act 1, religion and reason, politics and science, love and care, and finally, strange and unusual forms of humor (one of the strongest features of the series) in the following chapters, respectively.

Special attention is devoted to questions of gender definitions, metaphysical problem solving, time travel, nepotism, the dangers of religion and pure democracy, the nature and threat of perfect androids and robot (Kaylon) populations and the philosophical aspects of living with a multi-ethnic crew consisting of members from diverse planets and societies.
The show in two seasons so far is a perfect form of parody/and/or fan fiction that never forgets that it owes a lot to the Star Trek franchise. For that, MacFarlane is held in high esteem by the show’s fans, as The Orville “… uniquely recreates an ethos of exploration and optimism that has been buried for too long.” Hardly any recent sci-fi show could offer that. Furthermore, it is deeply rooted multiple times in popular culture – as it would not exist without The Next Generation – and equally tries to solve a multitude of present day (American) problems in a philosophical way, very close to Starfleet’s or Captain Picard’s problem solving attitudes.

This is the first book dealing entirely with Seth MacFarlane’s show that will soon have a third season which is currently shot and produced. The book comes with a foreword by a TV pro, namely André Bormanis, who was a science consultant for the Star Trek series and film franchise and presently is a writer and co-executive producer for The Orville.