Heart Full of Soul. Keith Relf of the Yardbirds by David French (2020) 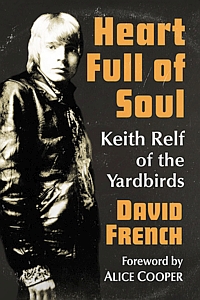 In the southwest of London, in 1962 a young Richmond band called The Metropolis Blues Quartet was staring to become England’s probably most innovative rock band. This band would become the nucleus of a guitar based outfit that later significantly altered music history and start, among other things, the American psychedelic and garage rock period. […]