From Ameche to Zozzled: A Glossary of Hard-Boiled Slang of the 1920s through the 1940s by Joe Tradii... 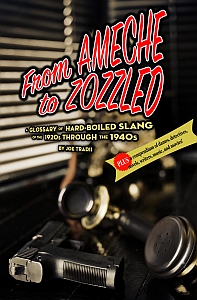 The hard-boiled fiction from the 1930s and the many films noir later, apart from several other similarities, shared a special gangster jargon and street-wise language that lent an extra air of authenticity to those works. As the many weird expressions, prohibition-time lingo, proverbs and often sexists, racist and plainly offensive words used there quickly went […]