Soundies Jukebox Films and the Shift to Small-Screen Culture by Andrea J. Kelley (2018) 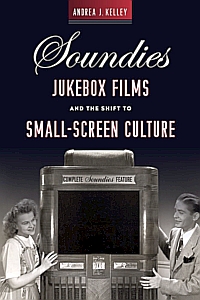 During the 1940s about 1,850 “Soundies” were produced in the US, destined to be played on 5,000 special standalone film machines in circulation nationwide. Those 16mm short films with a musical content were presented in coin-operated movie jukeboxes that were known as “Panorams,” which could be found in consumer places or likely in any place  […]